I love when teenagers get creative! 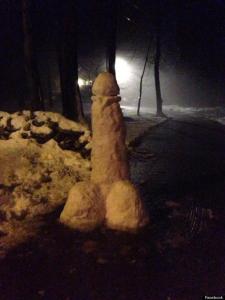 The East coast was slammed with a pretty nasty blizzard last week leaving many residents without power and digging their way out of the freshly fallen snow. Ryan Worthington of South Kingston decided to have fun with the snow that littered his front yard by making a Phallic statue.

After receiving such popularity both positive and negative Ryan decided to make the statue 12 ft tall, resulting in more attention. The snow boner was so popular a Facebook page was created in its honor not to mention the local paper ran a story on the life-size penis made of snow – minus the racy pictures.

The statue was the subject of two calls made to the local authorities by residents that did not find the freshly erected penis funny, Ryan, 16 made the originally 6 foot tall statue out of sheer boredom. Ryan’s mom, Raylene Worthington, 41, said “[He] put it there as a joke so I’d see it when I went to work  – I laughed my ass off.” The police came by and laughed  at the cold stiffy and left according to Ryan’s mom.

“They’re teenage boys there’s worse things they can be doing,”  “… if you have nothing else to do in your day other than complain about a snow penis we’ll make it 12 feet tall.” says Raylene.

Viagra’s got nothing on mother nature. People from all over came to the Worthington’s residence to take a picture with the cold hard penis. The penis is no longer erect however memories are still available for viewing on the Facebook fan page. 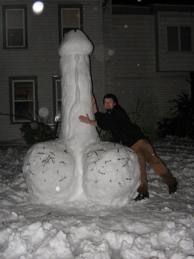 I thought this one was too funny! 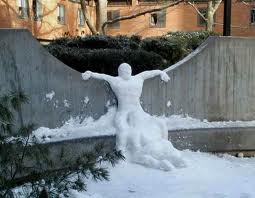 Yeah and I likes this one too!!
HAPPY READING